Seismic waves are our primary tools to explore the multi-scale structure of Earth— from its surface down to the inner core—and its wide range of processes, including earthquakes, volcanic activity, glacial processes, oceanic and environmental processes, and human-caused processes such as hydraulic fracturing or nuclear explosions.

The unprecedented growth of data and computational power have formed two pillars of seismology during the last decade. While numerical tools allow us to take full 3D complexity of wave propagation in seismic source and structural modeling, exponentially grown seismic data from traditional broadband seismometers as well as emerging instruments (i.e., distributed acoustic sensors, MERMAIDs, nodal arrays, etc.) offer new opportunities to monitor seismic activity and to improve resolution beneath continents and oceans. We need high-performance and Cloud computing to efficiently process large data sets and accurately model them. Seismic workflows involve various pieces depending on the problem, from retrieving field data from data repositories to processing and modeling them. Data processing requires easy access to large data sets, which becomes much more challenging for (near-) real-time monitoring studies, while seismic modeling of source and structure often deals with iterative workflows involving large earthquake or noise data, which can quickly turn out to be overwhelming tasks for researchers. The steep learning curve of modern computational technics and workflows, together with computational challenges, leaves limited time for students and researchers to focus on seismological and broader Earth science interpretations.

SCOPED (Seismic COmputational Platform for Empowering Discovery) is an NSF-OAC (National Science Foundation, Office of Advanced Cyberinfrastructure) funded initiative to address the large-scale computational and big data challenges in seismology to better harness the ever-increasing high-quality seismic data and available computational resources. SCOPED aims at building a cyberinfrastructure (Figure 1 & 2) that can facilitate high-performance and cloud computing-based seismic research to look for answers to questions such as:

Based on the research backgrounds and expertise in high-performance seismic modeling, cloud computing, and big data in seismology, five PIs from five institutes formed the four-year SCOPED project: Carl Tape from the University of Alaska Fairbanks, Ebru Bozdag from Colorado School of Mines, Marine Denolle from the University of Washington Seattle, Felix Waldhauser from the Columbia University, and Ian Wang from the Texas Advanced Computing Center at the University of Texas. SCOPED is based on tools developed by the PIs' in solving their real world workflow problems. These tools will be made available on the advanced cyberinfrastructure  - the Texas Advanced Computing Center’s Frontera system, as a suite of open-source software tools and will included 3D regional and global wave propagation solvers SPECFEM2D/3D and AxiSEM, codes which are hosted by CIG. Once established, the computational platform will be available to the community, starting with the training workshops in close collaboration with the larger community efforts such as CIG, Incorporated Research Institutions for Seismology (IRIS), and the Southern California Earthquake Center (SCEC). 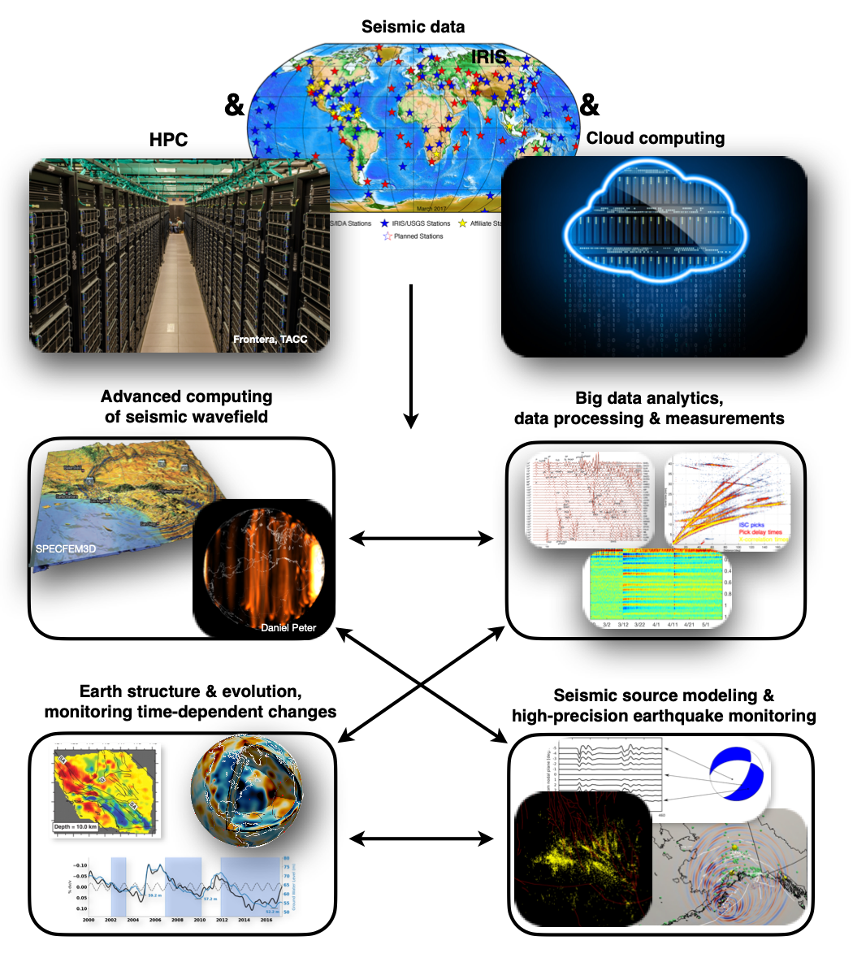 Figure 1. Representation of the unified and interconnected SCOPED Cyberinfrastructure. At the top, the global map of seismic stations represents one of several featured sources of data sets. Data are hosted and processed on HPC and on Cloud clusters, which overlie pillars of wavefield simulations (left column) and data processing and analysis (right column). Cross-disciplinary research will facilitate the investigations of outstanding questions about Earth and fault dynamics. 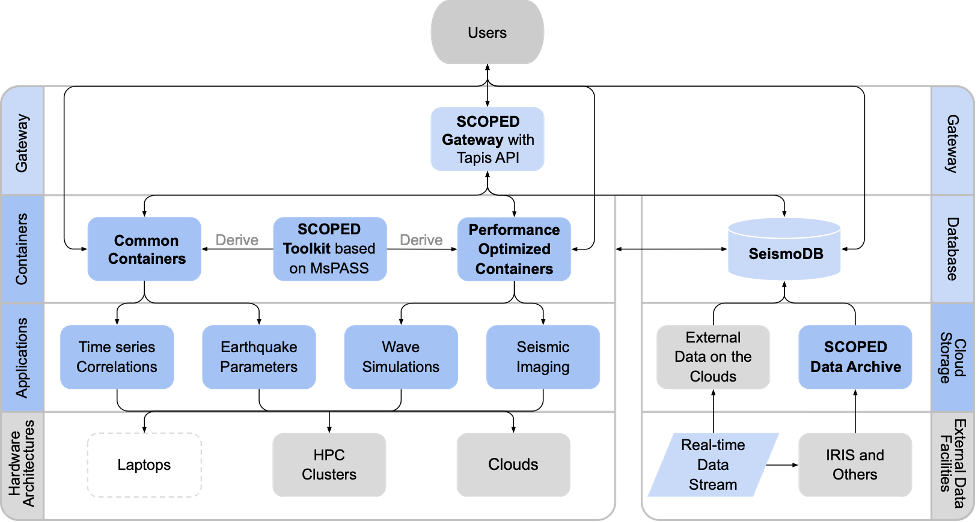 Figure 2. A schematic diagram of the SCOPED Cyberinfrastructure to be built that combines computation (left) and data (right). The SCOPED deliverables will be either fully functional (dark blue) or prototyped (light blue). The external components that SCOPED will interact with (gray) are either computing facilities, data archives, and/or users.