Dramatic topographic extension, an unparalleled suite of data from field observations and EarthScope, and well-constrained plate boundary evolution make the western United States a world-class natural laboratory for studying the thermomechanical processes of extensional collapse. The present-day Basin and Range province of Southwestern North America (SWNA) is the product of this complete period of extension. The extensional period is generally recognized to consist of an early phase in latest Eocene-Oligocene, in which metamorphic core complexes formed through evolution of low-angle normal faults that eventually exhumed highly sheared middle-crustal rocks (Bahadori and Holt, 2019).

Our simulations for the SWNA result in an early thickened crustal welt that was heated and weakened through the generation of partial melt, leading to extensional collapse, in 3-D of the highlands and flattening of the underlying Moho (Bahadori et al., 2022a). This model performs well in matching inferred fault motions and directions during the collapse of topography phase and accurately predicts deposition of sediments in basins that contain the mammal fossil and climate records (Loughney et al., 2021). With modeling of the extensional collapse along E-W cross sections of the Nevadaplano we find that a major detachment fault forms as the crustal root rebounds and the Moho flattens (Bahadori et al., 2022b) (Figure 1c-e). The detachment transfers middle crust up to the surface into a domed upwarp structure (metamorphic core complex). We show that these metamorphic core complexes arise because of the body forces, owing to the starting topography that is supported by a crustal root and therefore argue that the belt of metamorphic core complexes in the SWNA constitute a fossil signature of a thickened crustal root.

Coupled models can be used to better explain the present-day topography and crustal structural settings that resulted from extensional collapse of highlands, development of individual basins, and evolution of major detachment faults that have the potential to exhume and expose middle crustal rocks at the surface (metamorphic core complexes) in 3-D. An additional advance and planned future work includes the full/two-way coupling of these lithospheric body forces and mantle flow (ASPECT) to predict the time-dependent thermomechanical response at high resolution in 3-D, specifically within the crust (Figure 1f, g).

Figure 1 a&b. Radial cross-sections of the reconstructed mantle temperature variations, using ASPECT, from surface to core–mantle boundary (CMB) along the line A–B at latitude 37oN. 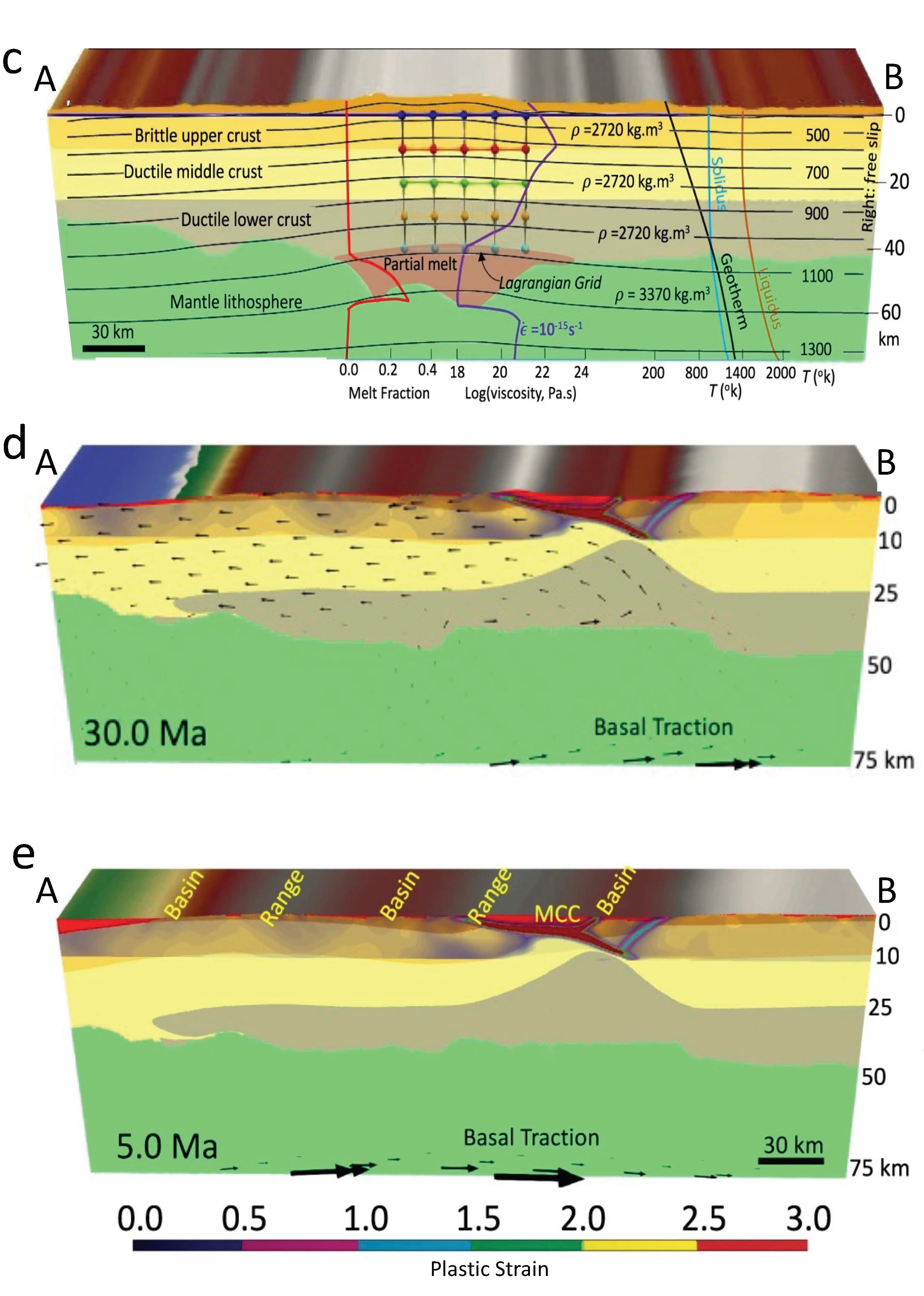 Figure 1 c. Model set-up and boundary conditions for the thermomechanical simulations, using UWG, that include partial melting in the deep crust. d&e. The evolution of crustal structure together with the magnitude of the finite plastic strain for the brittle upper crust showing the development of a major detachment fault, uplift of deeper rocks, metamorphic core complex development, and sedimentation from surface erosion. These processes of metamorphic core complex development occur after a thickened crustal root supporting topography is weakened through the introduction of heat, fluids, and partial melt. 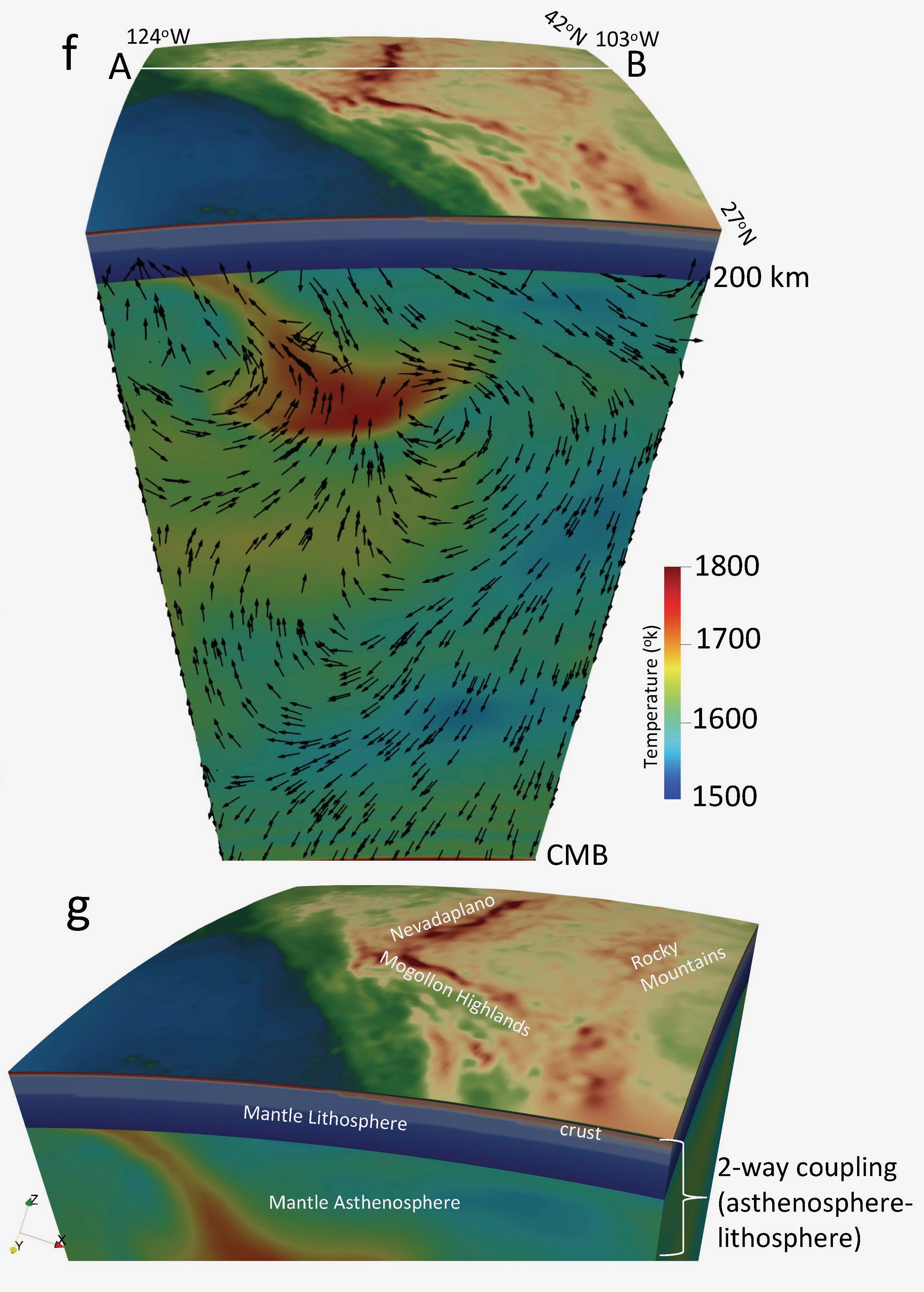 Figure 1 f & g. A representation of the model set-up with ASPECT, at the late Eocene in SWNA, for a future work forward model simulation that includes a two-way coupling between asthenosphere and lithosphere. CMB: core-mantle boundary, MCC: metamorphic core complex.