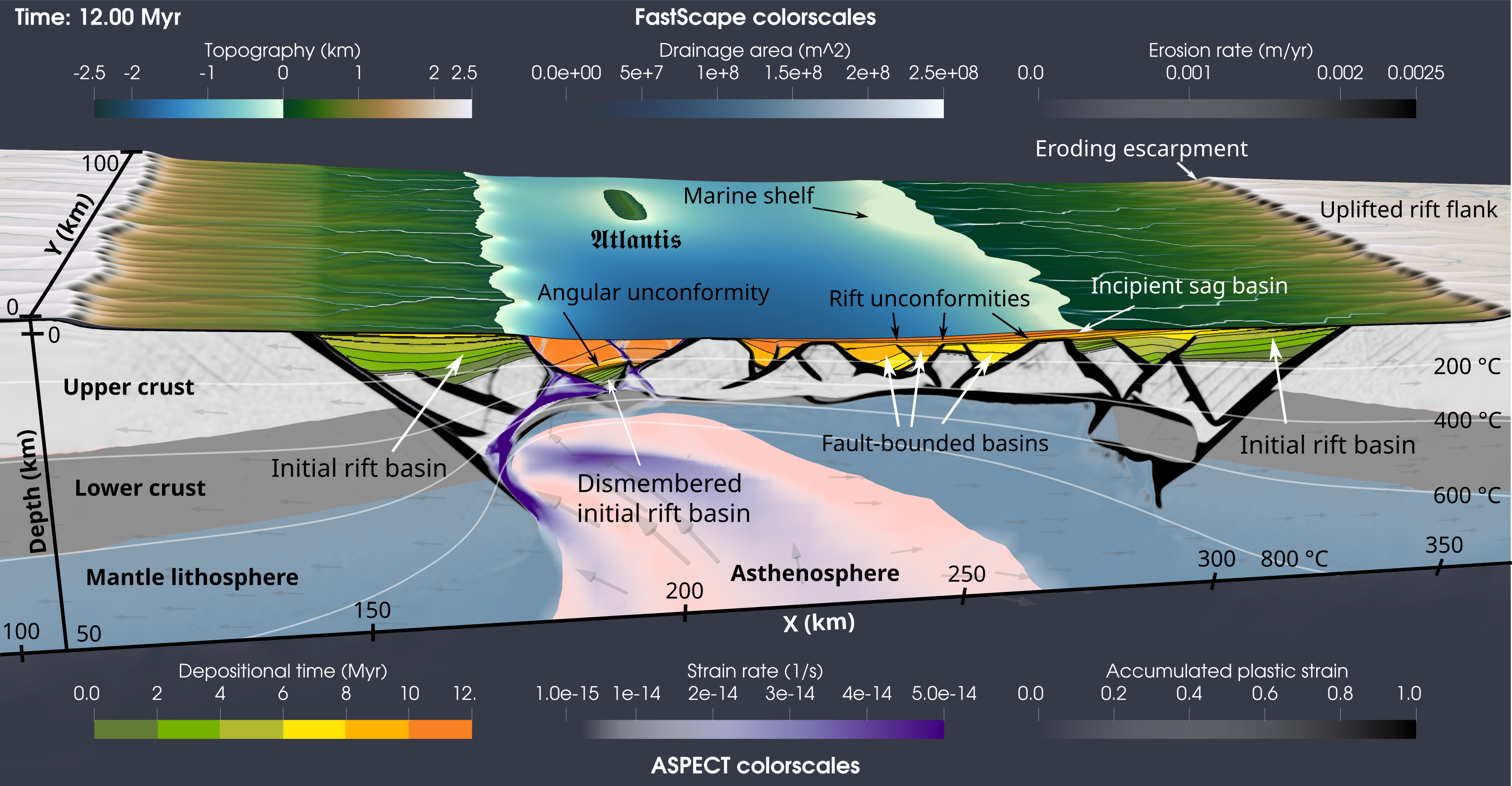 Fig 1: A snapshot of an evolving asymmetric rift model at 12 Myr. The FastScape surface is colored by topography, and additionally shows the drainage area (blue to white) and erosion rate (white to black). The FastScape surface topography is averaged along the Y-direction and sent back to ASPECT at each timestep. The 2D ASPECT model is colored by composition, showing the upper crust (light gray), lower crust (dark gray), mantle lithosphere (blue), and the asthenosphere (light red). Additionally, the depositional time of sediment is show in 2 Myr stepwise colors from green to orange, and 1 Myr sediment contour intervals are drawn in black. Accumulated plastic strain is shown from white to black.  White temperature contours show the temperature at 200°, 400°, 600°, and 800° C. Grey glyphs indicate the velocity direction.

ASPECT: surface processes and basin formation through a two-way coupling with FastScape

The FastScape-ASPECT coupling is a two-way coupling that allows the landscape evolution model FastScape to deform the surface of ASPECT. Geodynamic models commonly simulate surface motions by using either a free surface or a sticky air layer. Either method can produce unrealistic highs or lows in the topography because they do not account for erosional and depositional processes that redistribute surface material through time. This redistribution not only helps obtain realistic topographies, but the change in surface loading can have widespread effects on model evolution, such as lengthening the time a fault remains active (Olive et al., 2014), promoting model asymmetry and rift migration, or altering the thermal state through sediment blanketing.

FastScape is an open-source code available in multiple languages (Fortran, C++, and Python; Braun and Willett, 2013) that deforms a surface through routines that mimic geomorphic processes. This is primarily done using three methods: 1) hillslope diffusion, 2) the Stream Power Law (SPL), and 3) marine transport. On the continents, hillslope diffusion will move material into nearby valley’s though a linear diffusion equation proportional to the slope. The SPL forms these valleys and essentially describes sediment-carrying rivers that evolve according to the slope, a river incision rate, and the upstream drainage area. While some of the sediment load contained in these rivers is deposited on land during transport, the majority is deposited in the marine environment forming marine shelfs (Fig. 1). Like hillslope diffusion, marine transport works through linear diffusion that distributes the large flux of continental material throughout the marine environment, forming large basins.

The coupling utilizes FastScape to deform the surface of ASPECT. This deformation not only allows us to see the effects of erosion and deposition on an evolving tectonic model, but by using fixed compositional conditions at the surface of ASPECT, we can track sediment age, and basin formation and tilting through time. Figure 1 shows a snapshot of an evolving 2D asymmetric rift system after 12 Myr of extension (video). Here we can see margin architecture in detail, showing the initial rift basin that has been split apart, fault-bounded basins that formed during rift migration, as well as rift unconformities that occur as sediment is deposited post-tectonically on top of the syn-rift basins and inactive faults (Pérez-Gussinyé et al., 2020).

While Fig. 1 shows an example of surface processes applied to a rift model, erosional unloading and sediment deposition are important factors to consider in many types of geodynamic models. For example, in strike-slip settings high sediment loads near a weakened strike-slip plate boundary may force the creation of accommodation space and form flexural strike-slip basins (Neuharth et al., 2021; see supplement for more details on the coupling). In convergent settings, sediment is thought to lubricate the subduction interface, reducing the shear stress and possibly increasing the subduction rate (Lamb and Davis, 2003). Additionally, tracking basin formation and deformation through time provides an additional analogue for comparison between models and real-world locations. In all cases, the addition of surface processes to geodynamic models is an important step in better understanding how the surface of our planet evolves through time, and how the interior responds to such changes.